Import/export of presets is supported (see the description below of how it works) and the saving of presets for use in Audacity only.

To save the current effect settings as a User Preset, select Save Preset... from the Manage menu

Type a name for the preset then click OK after which the saved preset will appear in the "User Presets" list in the Manage menu.

Before you can export a preset you must already have saved it as a User Preset.

Each preset for Audio Unit effects is exported to a separate ".aupreset " file at /Users/<yourUserName>/Library/Audio/Presets/Apple/<effectName>/. A presets file lets you move settings for a particular effect between computers.

To export a saved User Preset, select Export... from the Manage menu 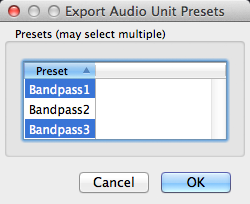 Select the user preset(s) you want to export then click OK to export each selected preset to a file. If there is only one preset in the list you must still select it, or nothing will be exported.

Select Import... from the Manage menu

Select the preset(s) you want to import then click OK to import each preset file as a User Preset.

Importing one or more presets does not load new settings into the effect. You must select one of the imported presets from User Presets... in the Manage menu

to load its settings into the effect.

to bring up the dialog illustrated below. When you change the options in this dialog, the changes apply only to the current effect that is open. All other Audio Unit effects will remain at the default options shown below until you change their options.