They support import/export of presets (where the particular effect supports this) and support saving presets for use in Audacity only.

To add a new VST effect most easily on Windows, put its DLL file into the "Plug-Ins" folder where you have Audacity installed. On Mac, the easiest folder to put the plug-in's VST file in is ~/Library/Application Support/audacity/Plug-Ins. Then use Effect > Add / Remove Plug-ins... to enable the VST effects and load them into Audacity, For details see Manage Effects.

Not all VST effects support importing and exporting of presets. If an exported preset file is empty, the effect probably does not support presets and Audacity will not be able to import the saved presets.

To save the current effect settings as a User Preset, select Save Preset... from the Manage menu

in the effect dialog, which brings up the following dialog:

Type a name for the preset then click OK after which the saved preset will appear in the "User Presets" list in the Manage menu.

Presets for VST effects are exported to a file. A presets file lets you move settings for a particular effect between computers on any operating platform that supports that effect.

Select Export... from the Manage menu

in the effect dialog to bring up the "Save VST Preset As:" dialog

Type a name for the file in the "File Name" box ("Save As:" box on Mac) then click OK to export the current effect settings to a separate file.

The following file formats are supported:

Select Import... from the Manage menu

in the effect dialog to bring up the "Load VST Preset:" dialog

Navigate to the place where you exported a VST preset file.

Depending on how the particular VST effect handles importing presets, the imported preset may show up in the User Presets submenu, the Factory Presets submenu or may not show up at all.

to bring up the dialog illustrated below. When you change the options in this dialog, the changes apply only to the current effect that is open. All other VST effects will remain at the default options shown below until you change their options. 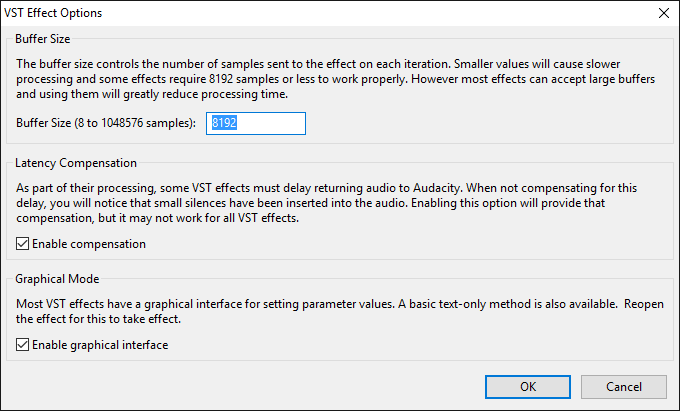