From Audacity Development Manual
Jump to: navigation, search
This sends audio via a command-line to an external program, either for processing or for encoding as an audio file.

Accessed by: File > Export > Export Audio..., then choose (external program) from the Save as type dropdown menu. 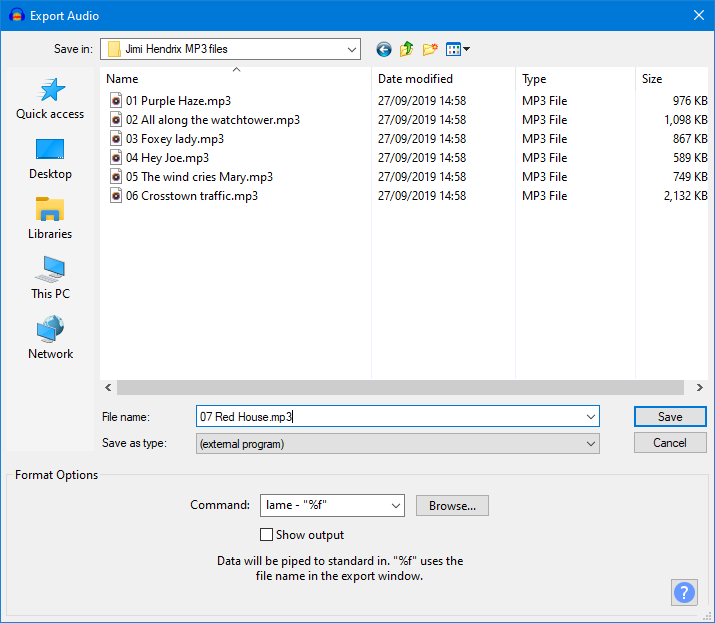 Also accessed by: File > Export > Export Multiple... then choosing (external program) from the Save as type dropdown menu.

From the Export Audio dialog, choose the destination folder, the file name and suitable extension.

In the Command: box type:

The "%f" command passes the file name and extension entered in the Export Audio dialog as the output file of the external program.

Two default commands are provided (these only work on Windows and Linux not on Mac):

The "Command" box holds up to the last 12 items entered. When a thirteenth command is entered, the first one (at the bottom of the list) is removed.

Note: Metadata Editor does not appear before command-line exports, nor are any tags it already contains passed to the external application. Use the appropriate command for your application to write metadata to the output file as described below.

Setting the path to the encoder

Accessing the LAME or FFmpeg command-line program with just the "lame" or "ffmpeg" command (as shipped with Audacity) only works on Windows and Linux, assuming LAME or FFmpeg are installed on the system in the standard location.

On Windows, this requires that you used the LAME or FFmpeg EXE installer and did not change the installation directory.

For using a downloaded version of LAME or FFmpeg, the full path to the command-line program must be given. The path must be enclosed inside quotes if there are any spaces in the path.

You can use the Browse... button to find and open the executable application which will add the correct path to the command.

Accordingly it is necessary to download a version of LAME or FFmpeg.

As with Widows and Linux, the full path to the command-line program must be given. The path must be enclosed inside quotes if there are any spaces in the path.

You can use the Browse... button to find and open the executable application which will add the correct path to the command.

If you are exporting to MP3 with LAME, there is a complete list of commands including metadata tags on the usage page.

If exporting using FFmpeg, you can view the FFmpeg command-line usage in the FFmpeg documentation. Guidance on valid metadata tags for various formats supported by FFmpeg can be found at http://wiki.multimedia.cx/index.php?title=FFmpeg_Metadata. For example this command exports to 256 kbps MP2 using FFmpeg:

Next, here are two example commands that use "-strict experimental" to specify the native FFmpeg AAC encoder. The native encoder is required to export more than stereo, up to a maximum of 6 channels. To export up to 8 channels you must point the same command to latest FFmpeg-git. Change the value before "k" in the following command to set a different bit rate in kbps. Note: "-strict experimental" is not required in this command if using latest FFmpeg-git:

The following command specifies a VBR quality range instead of bit rate:

Here is an example of a command to FFmpeg in an arbitrary location on Windows, forcing the exported codec to Apple lossless. When specifying the file name above the command, add the extension ".m4a" (without quotes), not .alac:

Finally, here is an example command to FFmpeg in an arbitrary location on Mac, setting metadata for genre and artist/composer in an exported M4A file with the standard AAC (lossy) codec:

This command exports a FLAC file without any options: