Keyboard Preferences lists, searches for and sets the keyboard shortcuts which can be used for numerous commands in Audacity as an alternative to using Menus, Toolbars or mouse gestures. A full list of the commands with their default shortcut key bindings is available at Keyboard Shortcut Reference. 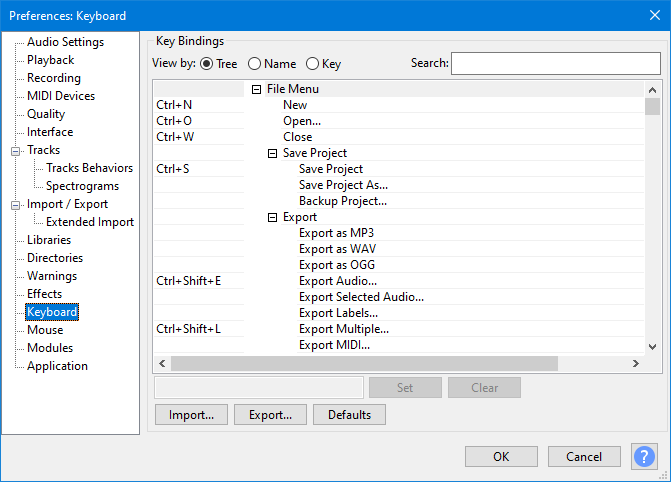 There are three ways of viewing the shortcut keys or "bindings" which you can select by clicking on the appropriate radio button. The view chosen when you click OK to close Preferences is remembered when you access Keyboard Preferences next time. 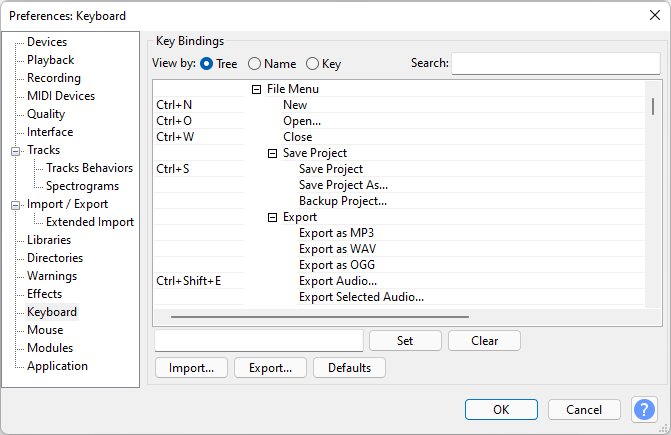 This is the default view. On the left-hand side, it lists all the commands to which keyboard shortcuts can be assigned. On the right-hand side, the currently assigned shortcut for each command is shown (if any). The commands are grouped then listed within each group in the same order in which they appear in the Audacity Menu Bar. If a group of items are in a submenu within their Menu Bar, that group appears in the tree indented to right as a sub-group within their group. There is a final "Command" category listed in alphabetical order for commands which do not have a Menu Bar entry.

The menu groups and sub-groups ("branches" in this "tree" view) always open fully expanded. You can click on any branch's

collapse button to collapse the branch. Any branch which is collapsed can be expanded by clicking on its

To navigate through all commands and title rows starting with a particular letter, type that letter.

Search box: Typing in the "Tree" view search box looks for that text string in a command name, title row or shortcut. You can enter text in upper or lower case (search is not case-sensitive). 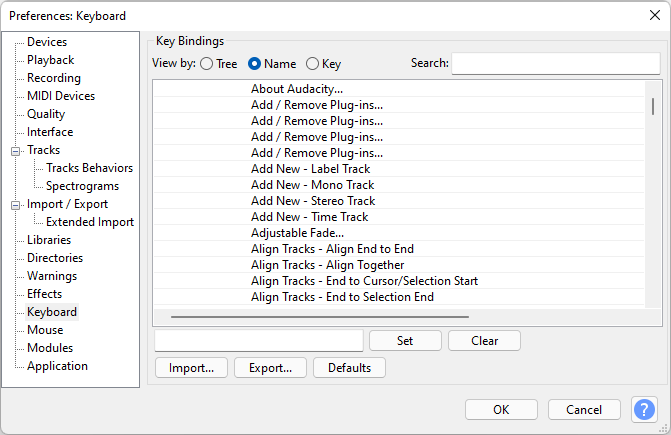 "Name" view lists on the left-hand side all the commands in alphabetical order, with no grouping. On the right-hand side, the currently assigned shortcut for each command is shown (if any).

To navigate through all commands starting with a particular letter, type that letter.

Search box: Typing in the "Name" view search box works similarly to search in "Tree" view, except that the text string you type is searched for only in command names and title rows and not in shortcuts. This can give more focused search results when you really only want to search in the command name. 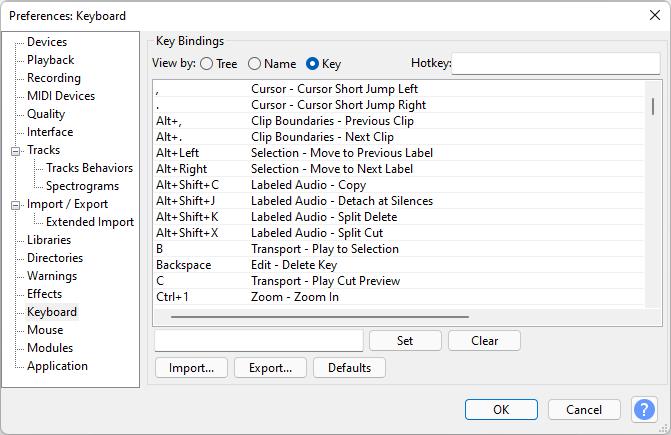 To navigate through all shortcuts starting with a particular letter, type that letter.

As an example, Shift + 6  or Ctrl + Shift + P  are both valid bindings. Your chosen key or key combination will now replace the previous content of the input box.

If your chosen shortcut is already assigned to a command, Audacity will show a dialog asking you to confirm the change. Click OK to assign your chosen shortcut to the chosen command. This will remove the shortcut for the command that originally used it, leaving that command with no shortcut. Click Cancel to make no change of shortcut.

Audacity does not check for shortcuts which are allocated to more than one command when importing the file, so edit carefully.

The only entries you can usefully edit are the actual key bindings themselves which are in the "key" string at the end of each command. For example, to set the key binding for "New" to Shift + N, the command in the XML file should read:

Be sure not to delete the closing "/>" characters at the end of the command.

You can use the Defaults button to switch between the two provided default sets of shortcuts at any time.

This button is also handy if you are making custom shortcuts and decide you have not got your changes right and want to start over again.