From Audacity Development Manual
Jump to: navigation, search
Audacity can display in many non-English languages. By default, Audacity runs in the language the operating system uses (the language chosen in the Windows installer of Audacity only determines the interface language of the installer).

Changing language when installing on Windows 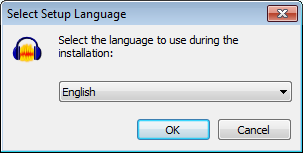 This means that if you are on Windows and the language in your Audacity installation is not to your liking you can simply re-install Audacity and choose a different language.

Open the Interface Preferences, choose the specific language required from the "Language" box, then click OK. Most of the interface will change language at once, but a very few interface elements will change next time you restart Audacity.

Navigating the menus in an unfamiliar language

If you cannot read the menus because the text is in an unfamiliar language or has ??? characters, you can navigate the menus sequentially to change the language.

If only "English" or "System" choices are in the Languages box in Interface Preferences, ensure the "Languages" folder is in the correct location as follows:

On Mac open /Applications/Audacity/, right-click or control-click over Audacity.app > Show Package Contents then ensure the "Resources" folder at Contents/Resources contains the correct LPROJ folders for each language.

Missing language files or folders can be corrected by reinstalling Audacity.

Change language in the system settings

To change language, find the [Locale] line in the .cfg file and change the line underneath it to your preferred language using the two-digit ISO 639-1 code. For example, "Language=en" (without quotes) sets English or "Language=de" sets German.

If the two lines for Locale do not exist in audacity.cfg (which will be the case if Audacity has only ever run in the system language) add the lines as in this example:

Now save audacity.cfg, restart Audacity and it will launch in your chosen language.

Deleting the [Locale] line and the line under that in audacity.cfg (or deleting audacity.cfg itself) is a quicker method if you only want to revert Audacity to use the language the operating system runs in.

As well as US English, the Audacity software supports a significant number of other languages. There are no localized versions of Audacity. Instead, single versions of Audacity for the various operating platforms are shipped with gettext MO files. These files are then used to display the different languages.

Audacity is Unicode and thus should display non-English languages correctly on any localisation of the operating system if the system supports that language.