From Audacity Development Manual
Jump to: navigation, search
Manage Macros allows you to edit, remove or rename existing Macros or add a new Macro and to apply Macros to you project or a set of files. Any built-in, LADSPA, LV2, Nyquist, VST or Audio Unit (Mac) effect shown in the Effect Menu can be added to a Macro. You can also add plug-ins in any format that are shown in the Generate or Analyze Menus (including Vamp analysis effects), the built-in Find Clipping analyzer and a number of export commands.

Macros may be applied to either the entirety of the current project or to a selection of files using the Tools > Macros... command.

For help with what the Macro effects do and how to set their parameters, see Effect Menu

Select Macro contains a list of already defined Macros. You can define the name of a new Macro and select which Macro is active.

The left hand box in the dialog (labeled Select Macro) contains a list of already defined Macros. Until you add a new Macro, it only has built-in "MP3 Conversion" and "Fade Ends" Macros.

Edit Steps in the Macro

Edit Steps lists the sequence of commands in order of first to last (End) for the Macro selected in the "Select Macros" box to left.

To edit an existing command double-click it, or use the Up or Down keyboard arrow to select it then press Space. The parameter settings dialog for that command will be displayed.

A few commands are intentionally omitted from the Macro Manager (such as "Close:") because they are unsuitable for use in Macros.

To insert a new command in a Macro, left-click or use the Up or Down keyboard arrow to select an existing command. The new command to be inserted will be placed above this selected command. Then press Insert.

Alternatively, use the Up or Down keyboard arrow to select the command, then press Space. 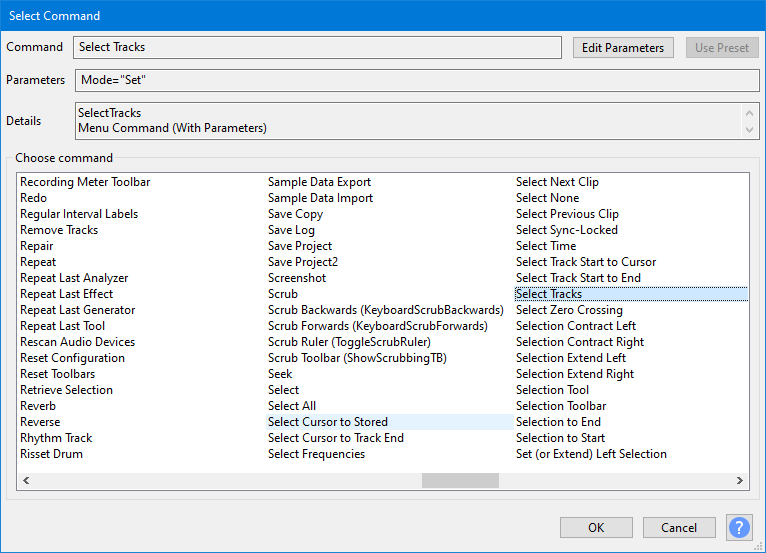 The full list of all commands, with descriptions, is available at Scripting Reference. 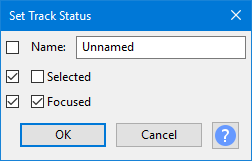 Commands that call Effects, Generators, Analyzers or Tools, use the same familiar graphical interface (GUI) as appears when they are used from the normal top level menus.

Many of the other commands provide a simple GUI comprised of checkboxes and text entry boxes. Typical examples can be seen in the Scriptables I and Scriptables II menus.

Selections in Macros applied to Project

Macros will work on pre-existing selections you make in your project prior to running the Macro. But the selection can be over-ridden by your Macro itself as there are Macro commands available to effect selections in the audio.

Selections in Macros applied to Files

When applying a Macro to files there is no pre-existing selection so you will need to create a selection in the Macro if your Macro requires audio to be selected to act on (and most Macros do).

Not: "C:\Users\<username>\Desktop\myfile" (no file extension)

When entering the pathing data in the edit parameters dialog for the command you do not put the quote marks for example: C:\Users\<username>\Desktop\my file.flac

The following two commands are now deprecated and may well be removed in future versions of Audacity. They were part of "CleanSpeech" (which has long been removed from Audacity).

Comments be added to Macros to enable you to document what is happening in the Macro.

Use the "Comment" command in the Macros command to set and edit its parameters to type the text of your comment. 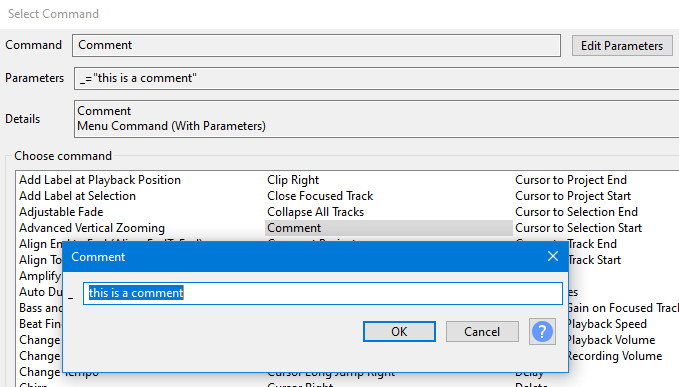 Use the Shrink button to show a reduced Macros Palette dialog with a simple list of the existing Macros, enabling you to apply the Macros but not edit them.

This smaller version is useful for presets. It stays open after applying a macro, so it is a palette of custom functions, and you can pick another and apply that.

Using the Expand button on this reduced dialog will return you to the full Manage Macros dialog.

Apply Macro to enables you to make a Macro operate on either your current open Project or a set of selected external Files.

See Macros Palette for details of how these two buttons operate.

Close to exit the dialog

To dismiss the dialog simply click on the Close button.

If there any unsaved changes you will be asked if you want to save them or not.

See the Macros Examples page for examples of using Macros.

This error may sometimes occur for one or more commands in a Macro when updating from a previous Audacity version. The error may also occur if users sharing Macro have different Audacity versions or different versions of the plug-ins used in the Macro. The error will occur if: To resolve these errors, ensure you have compatible versions of all required plug-ins and that the plug-ins are installed correctly. If necessary, use the "Manage Macros" dialog to delete the command that fails then insert a replacement command for the same effect from the "Select Command" dialog.