From Audacity Development Manual
Jump to: navigation, search
Audio Setup Toolbar enables you to manage the setup of your audio input and output devices and adjust the latency of your computer. 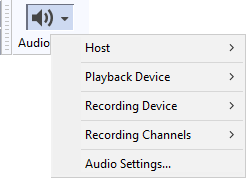 Selects the particular host interface with which Audacity communicates with your chosen playback and recording devices.

Windows: on Windows the choice is between the following host audio interfaces:

Mac: On Mac the only choice is Core Audio.

Linux: On Linux there is often only one option: ALSA. Other options could be OSS and/or Jack Audio Connection Kit (also known as "Jack" or "Jackd").

Selects the device to be used for playback. What is available will depend upon your computer and any other connected hardware.

Selects the device used for recording. What is available will depend upon your computer and any other connected hardware. You may get different devices available when you change Host.

On Windows, each entry for recording device consists of the input type (such as microphone), followed by the name of the audio device the input belongs to. If you have multiple audio devices, the list will be grouped so that inputs of each device are grouped together. The input level of the selected device can be adjusted in Mixer Toolbar, but device selection is no longer made there.

The number of channels to be recorded. On most inbuilt sound devices, especially on Windows, only 1 (Mono) or 2 (Stereo) will be available.

Brings up a dialog that enables you to make all the above settings plus the ability to manage the latency on your computer: 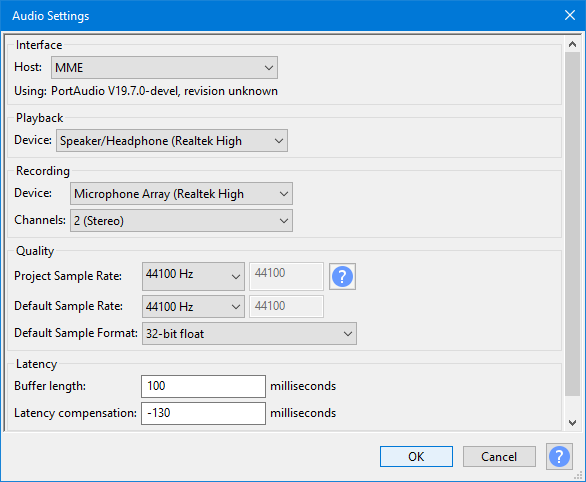 As an alternative to using Audio Setup, you can make and change all the same settings with Devices Preferences.

With Device Toolbar you can make and change most of the same settings with the exception of the latency settings.

Note that he Device Toolbar is NOT displayed by default in Audacity. To enable it, click on View > Toolbars and check on Device Toolbar.