From Audacity Development Manual
Jump to: navigation, search
Audacity has two meter toolbars, one for recording and the other for playback. They display the amplitude of audio being recorded or played in the project. They are an easy way to see if audio which is being recorded or edited is clipped, which results in distortion. Both meters look very similar. The Recording meter can be identified by the microphone icon, whereas the Playback meter has a loudspeaker icon.

Click on the toolbar images below to see these toolbars displayed in context of the default upper tooldock layout.

Audacity always launches with input monitoring off and so the Recording Meter Toolbar displays "Click to Start Monitoring". Click in the recording meter to start monitoring, or when you press the

Record button the meter will activate. The Recording Meter Toolbar again displays "Click to Start Monitoring") whenever you stop a recording or start playback.

Recording Meter Toolbar in use

The bars remain green until the signal reaches -12 dB then merge to yellow as the signal approaches -6 dB (which is a good maximum signal level to aim for). If the signal exceeds -6 dB the bars merge from yellow to red. The red color warns that the signal is becoming too "hot" (approaching 0 dB) and that clipping may occur.

Playback Meter Toolbar in use

The Playback Meter will activate when you start playback, or if you start Recording with Software Playthrough turned on in the Transport menu.

The orange color displayed here in the left channel warns that the signal was too "hot" or becoming too "hot" (approaching 0 dB). The red bar at the right of both channels indicates that clipping has occurred at some stage while playing.

Clicking on the microphone or speaker icons in the Meter toolbars will open a dropdown menu with the Meter Options dialog specific to that meter. Another way to access the menu is by right-clicking anywhere in the meter.

The dropdown menu on the Recording Meter additionally lets you enable or disable monitoring of the recording level without the need to record a track.

Selecting Options... from the menu opens the Meter Options dialog which lets you change that meter's style, visual orientation, the scale format and more: 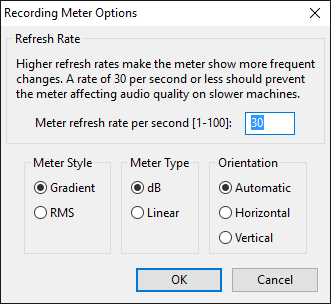 What the bars and lines mean

Explanation of abbreviations in the image

To find the exact points where clipping exists in a track, enable View > Show Clipping or run Analyze > Find Clipping....

Having chosen the correct recording device in Device Toolbar, use the recording volume slider on Mixer Toolbar to adjust the level of audio being recorded. In the image above, note that the blue lines in the recording meter (indicating the maximum peak level attained) are at about -6 dB. This is a sensible level to aim for when recording, because it gives you headroom to make edits affecting volume afterwards.

Note that in some cases the recording volume slider may not be visible, as described on the Mixer Toolbar page. In that case you will need to use your audio interface's or operating system's recording/input volume control to set the recording level in Audacity.

It is good practice to test the correct recording level before recording for real. Monitoring lets you do this without actually having to record and then delete a test track. It also verifies that you are recording the input source you expect. There are two ways to turn monitoring on and off:

The playback level displayed in Meter Toolbar reflects the combined amplitude of all the tracks in your project, in other words, the level of the mix as determined by the gain sliders on each track.

The playback volume slider on Mixer Toolbar does not affect the playback meter - the purpose of the meter is solely to indicate what the loudness of the project audio would be were you to export it as an audio file.

Like all toolbars, either or both Meter Toolbars can be undocked. They can also be resized. Resizing gives longer scales for the meters and hence a more accurate view of the volume levels.

Audacity offers two choices of style for metering. You can switch between the two meter styles in the Meter Options dialog which is accessed by the Meter dropdown menu. For both styles, L shows the left channel and R the right channel.

This is the default meter style for Audacity. Both the Playback Meter (loudspeaker icon) and Recording Meter (microphone icon) display in the same colors. The bars remain green until the signal reaches -12 dB then merge to yellow as the signal approaches -6 dB (which is a good maximum signal level to aim for). If the signal exceeds -6 dB the bars merge from yellow to red. The red color warns that the signal is becoming too "hot" (approaching 0 dB) and that clipping may occur.

You may wish to use full-height meters (as were used in earlier versions of Audacity). If so, you can undock the meter by dragging the serrated edge on the left, then drag the meter downwards (at bottom right) until it's the full height. That will make the numbers appear under the meter bars.

This was the previous style of meter used in Audacity. Users of earlier versions of Audacity or those recording to specifications required for audiobooks may prefer to use the Meter dropdown menu to open Meter Options and change to this style of meter.