From Audacity Development Manual
Jump to: navigation, search
The Export Multiple dialog appears in response to the File > Export > Export Multiple... command. This command exports multiple files at once, either one file for each Audacity audio track, or one file for each label placed below audio tracks. Exporting Multiple by labels is a convenient way to export separate files for each track in a long recording.

For Export Multiple, selections in the waveform play no part in determining the audio that is exported.

See the Tutorial - Copying tapes, LPs or MiniDiscs to CD for an example of how this is used.

Please be aware that when using Export Multiple Audacity will only export tracks that are not grayed-out by use of the Mute or Solo buttons in the tracks' Track Control Panels. So what you hear by previewing with playback prior to export is what you will get in the Exported audio file. 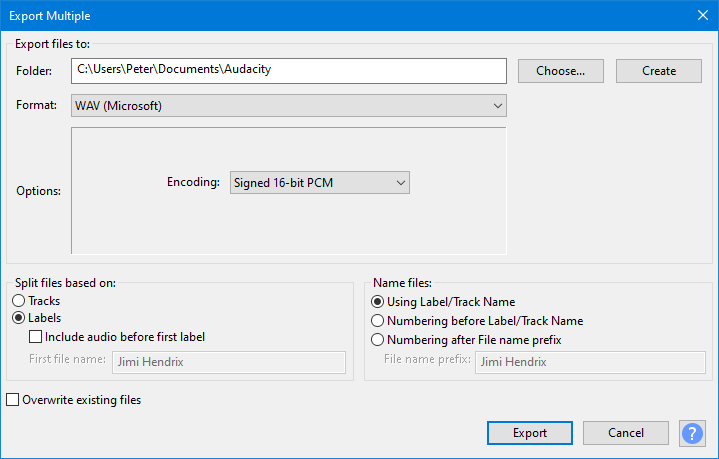 Use the Options pane to choose the options for the export format you have selected. It enables you to make settings like quality or encoding for formats with options. As an example, here is the Export Multiple dialog with the MP3 format selected showing the options available for that format: 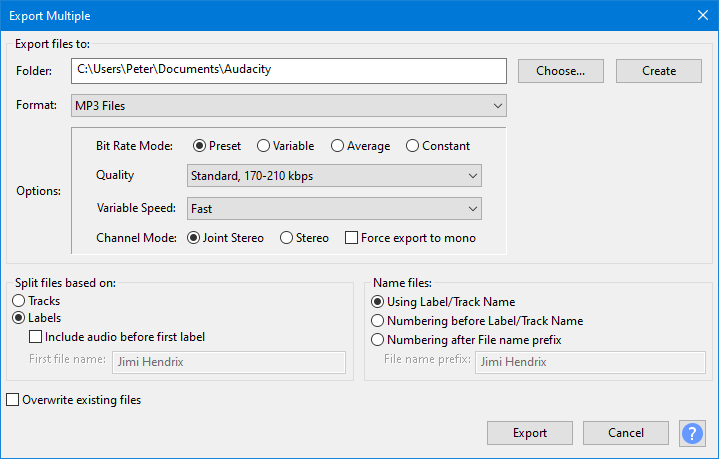 Split files based on:

For both splitting files based on tracks or labels, the metadata exported for each file will be the same (except for Track Title and Track Number) unless your Import / Export Preferences are set to show Metadata Editor and you enter the metadata for each file manually. If you want to import and export multiple audio files and preserve each file's tag values automatically, use Macros instead.

When checked, any pre-existing files in the chosen export location which have the same name as the file to be exported will be replaced (without prompt) by the new file. However, there is an exception to this; if the Export Multiple process would create identically named files based on label text or track name these files will not be overwritten but given an ascending numerical suffixes.

Clicking the Export button will export the audio to the folder location, with the file name(s) and type you have selected.

Clicking the Cancel button will abort the export dialog without exporting any files. {{note|

Once you have clicked the Export button, or the final metadata OK button, Audacity will display a dialog enabling you to monitor the progress of the export: 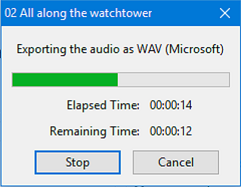 The green bar is a visual progress indicator. The Elapsed Time and Remaining Time are based on an estimate of the total time needed to export the file (the estimate may change as the export progresses).===Stop and

Once multiple exporting has completed, a status window is displayed showing the resulting files: 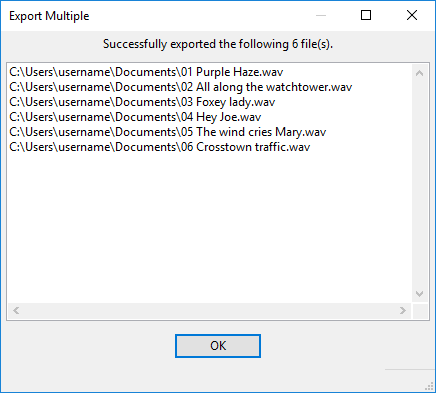 Click the OK button to close this results dialog.

Examples of use of labels with Export Multiple

In the following examples the choices in the dialog would be: "Split files based on: Labels" and "Name files: Using Label/Track name".

Case 3: A point label marking each song except the first

This is a case where you would want to check "Include audio before first label" and supply a file name in the "First file name" text box.

In this case we want to export only two songs - perhaps songs by the same artist from a compilation album. Each song is marked with a region label.

Case 5: A mix of point and region labels

In the case above we have an interview with a series of questions (upper track) and answers (lower track), and a concluding statement by the interviewer. We want to export the question-answer pairs and the interviewer's conclusion as separate files.

In most cases the question-answer pairs follow one after another, so point labels are a quick and convenient way to mark them. However after the third answer, the interviewer is told by the studio manager that time is running out, and the two parties discuss this. We want to omit this exchange.

So this is what will be exported:

Note that in order to export the pairs and the conclusion excluding the interruption, we could equally have drawn region labels for each, similarly to Case 4 above. Had we needed to edit each of these regions individually before export, it might have made sense to label them as regions in any case.