An Audacity project can contain multiple audio tracks. Each track is normally in one unbroken section, something like a single film clip. However, Audacity can split a track so as to create multiple clips within that track.

Each clip in a track can then be moved around independently, but they all share several properties of the parent track such as its overall volume, panning, sample rate and sample format.

The terms channel, track and clip can be a little confusing, especially because some applications may use them to mean slightly different things. Within Audacity, the meaning is as follows:

You can trim a clip by dragging near the upper corner of its left and right edges. Doing so will hide the waveform that goes beyond it (as opposed to fully deleting it), so if you make some edits to the clip and then later decide to un-trim it, you can just grab the upper corner again and extend it.

Splitting a track into Clips

When you record some audio or import audio from a file, you get a single track. In many cases, there are natural gaps in the audio - silence between sentences or pauses between phrases in music. Those are good candidates for splitting the track into multiple clips, allowing you to move or otherwise manipulate those clips independently. There are several ways to create multiple clips in a track.

As an example, the "before Split " and "after Split" images below show that after selecting Edit > Clip Boundaries > Split, the two boundaries of the gray selection region are overlaid with a solid black split line, marking the boundaries of the three resulting clips.

It's easy to select all the audio of a given clip. Make sure that Selection Tool

is enabled in Tools Toolbar then double-click in the clip. You can also select all of an entire track that has no individual clips in this way.

Unlike cursor points or selection regions, split lines representing boundaries between clips persist in the waveform of the track until the clips are merged or joined back into one clip.

An adjacent pair of clips may be "merged" into one clip by clicking on the split line to remove it. You can perform a similar "join" action without a mouse by selecting across one or more split lines then using Edit > Clip Boundaries > Join to remove the split lines so as to make one clip.

A number of menu items and corresponding keyboard shortcuts can be used to select and navigate between clips.

To move a clip, simply drag and drop it using the clip handle (the light area with the rounded corners) at the top of the clip.

To move multiple clips at once, select all of the clips you want to move using the Selection Tool

, then drag a clip handle within the selected region to move all selected clips. This will also move the selection area with it.

Note that moving clips can make use of the yellow Boundary Snap Guides (also seen in the chapter on Audacity Selection). When you move a clip, Audacity will snap the left or right boundary of a clip to the nearest edge of a clip in any other track marking it with a yellow vertical line, making it very easy to line up clips during editing.

In cases where they aren't, the following rules apply:

If an audio track is dragged to the left (earlier on the Timeline) audio data may be hidden before the start of the track. This is indicated by the presence of two arrows at the left edge of the track. 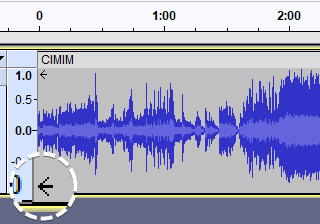 Audio before time zero is not exported unless that audio is explicitly selected and File > Export > Export Selected Audio... used, or unless Export Multiple is used with "Split files based on Tracks". In this Export Multiple by tracks case, the entire audio of each track is exported, including that behind zero, regardless of any selection.

Moving a Clip Between Tracks

You can move a clip to a different track, but there must be room for the clip between the clips on the second track. 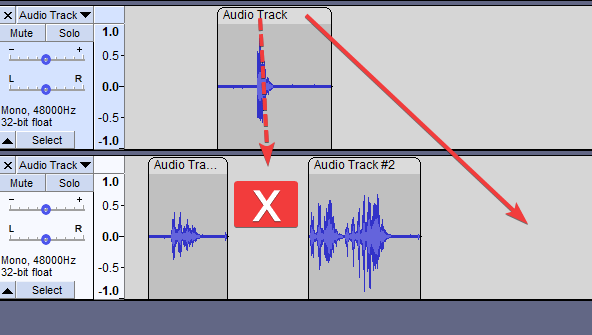 You can optionally change the colorway of the waveforms displayed in your project. The setting is per track and not per project so you can have multiple colorways in the same project as in the image below.

Four colorways are available with the color selection made from the dropdown menu in the track's Track Control Panel.

A Clip takes on the selected color of the waveform that it originates in.

When a clip is moved into a different colored track, the clip retains its original color.

Blue clip in the top track with sufficient space in the bottom, red track