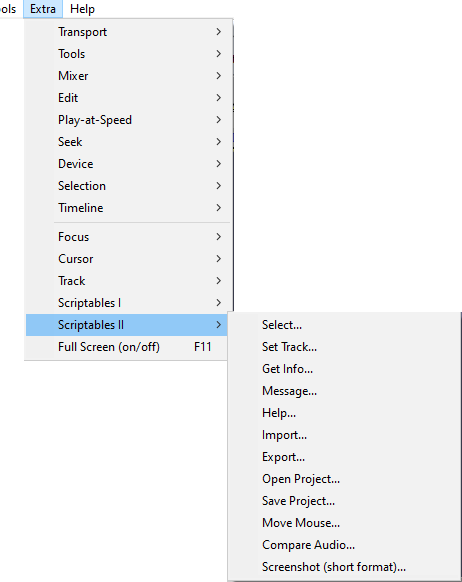 These commands were originally written for scripting Audacity, e.g via a Python script that uses mod-script-pipe. The commands though are also present in the menu, available from Macros, and available from within Nyquist using (aud-do "command") 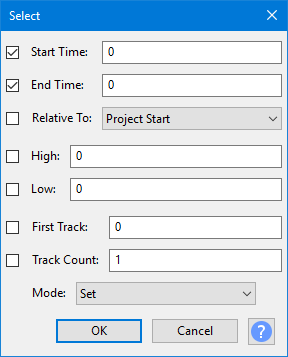 Selects audio. See the corresponding discussion on the Scriptables I page for what the various fields do.

Sets values for selected tracks. See the corresponding discussion on the Scriptables I page for what the various fields do.

Gets information in a list in one of three formats.

Used in testing. Sends the Text string back to you.

This is an extract from GetInfo Commands, with just one command.

Imports from an audio file. The automation command uses a text box to get the file name rather than a normal file-open dialog.

You have to give the full file name (including path and filename extension).

Exports to a file. When using Export2 you have to give the full file name (including path and filename extension). 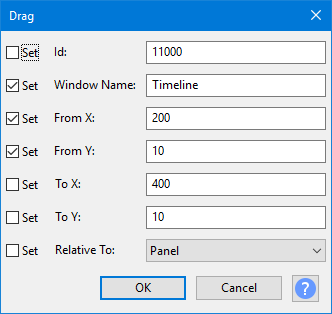 Experimental command (called Drag in scripting) that moves the mouse.
An Id can be used to move the mouse into a button to get the hover effect.
Window names can be used instead of Ids.
If To is specified, the command does a drag, otherwise just a hover.

Compares selected range on two tracks. Reports on the differences and similarities. 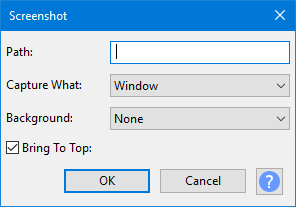 A version of Help > Screenshot with a more minimal GUI. One of the most useful options is All_Tracks.
The _Plus suffix includes the timeline.