From Audacity Development Manual
Jump to: navigation, search
These commands provide tools for mixing and rendering your selected tracks to a single stereo or mono track. 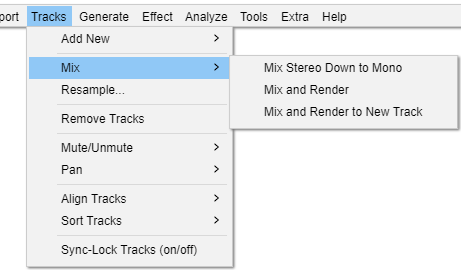 Mix Stereo Down to Mono

Converts the selected stereo track(s) into the same number of mono tracks, combining left and right channels equally by averaging the volume of both channels. The tracks will be rendered with any amplitude envelope or gain and pan settings applied.

An important reason to convert stereo to mono is that it produces higher quality for the same bit rate (and hence file size) in lossy, compressed audio files like MP3 or AAC. Stereo Track to Mono is not available with stereo tracks split into left and right channels, or where the start or end positions of the channels are different.

Mix and Render mixes down all selected tracks to a single mono or stereo track, rendering to the waveform all real-time transformations that had been applied (such as track gain, panning, amplitude envelopes or a change in project rate).

Like all tracks, the "Mix" track can be renamed using the Audio Track Dropdown Menu.

This command performs the same actions as Mix and Render above, except that the original tracks are preserved rather than being replaced by the "Mix" track.

The resulting track (called "Mix") is placed below the last selected track.

If you use Mix and Render or Mix and Render to New Track on a single track (this is basically just Rendering as there is nothing to "Mix") the track will retain its original name: