From Audacity Development Manual
Jump to: navigation, search
Mixer Board is an alternative view to the audio tracks in the main tracks window, and is analogous to a hardware mixer board. Each audio track is displayed in a Track Strip. Each Track Strip has its own pair of meters, gain slider, pan slider, and mute/solo buttons, echoing that track's controls in its Track Control Panel.

The Mixer Board... command is enabled whenever there's an audio track - it can even be brought up during playback.

Accessed by: View > Mixer Board...

The Mixer Board... command is enabled whenever there is an audio track - it can even be brought up during playback. When there are no audio tracks it is grayed-out and unavailable.

The Mixer Board window will always remain on top of the Audacity Window if they are superimposed. 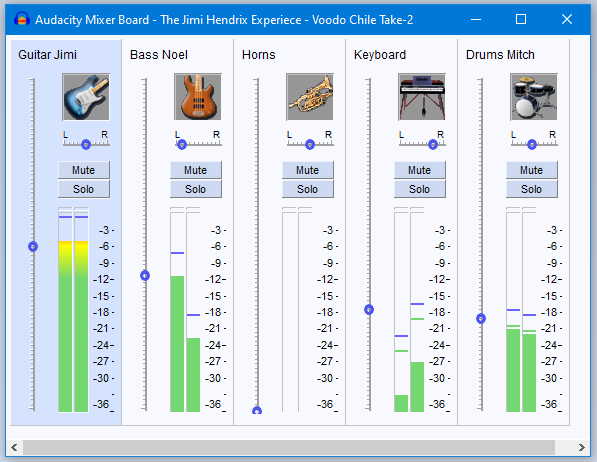 As in the Track Control Panels, double-click in either Mixer Board slider to enter an exact gain or pan value in a text box.

The meters are post-fade, like the Meter Toolbars, such that they show the levels as modified by the track's gain/pan sliders and mute/solo buttons. Mono tracks show in both track meters, as in the Meter Toolbar.

You can select a Mixer Board track by clicking its instrument image (or the Audacity logo if no instrument image is available). Selection of a track in Mixer Board is indicated by the blue background. In the example above it is the "Guitar Jimi" track that is selected.

The example in the image

Note the following points in the image above:

By default, the image at the top of each Track Strip is the Audacity logo, but if you name the track in the Track Control Panel with an instrument name or abbreviation thereof, Mixer Board automatically shows an appropriate image as listed below. A track name that contains any of the keywords (in bold) will display the image that is associated with those keywords. If the track name contains keywords for more than one instrument, the Mixer Board will display the best match.