From Audacity Development Manual
Jump to: navigation, search
MP3 Export Options let you choose the quality of files exported to the popular MP3 format. You can choose between variable, average or constant bit rate, or from one of four common presets. Encoding speed can be specified, and Joint Stereo encoding chosen as an option.

As with all lossy, compressed formats, there is a trade-off between the size of the file and the quality of the encoded file, higher quality requiring larger files.

Note that MP3 files have a short silence at the beginning. This is not a bug in Audacity but is a limitation of the MP3 format that makes applications writing or playing MP3's add a delay. If you need to synchronize files or are making Audio Loops, use a format that does not have this limitation, such as WAV, FLAC or Ogg Vorbis. 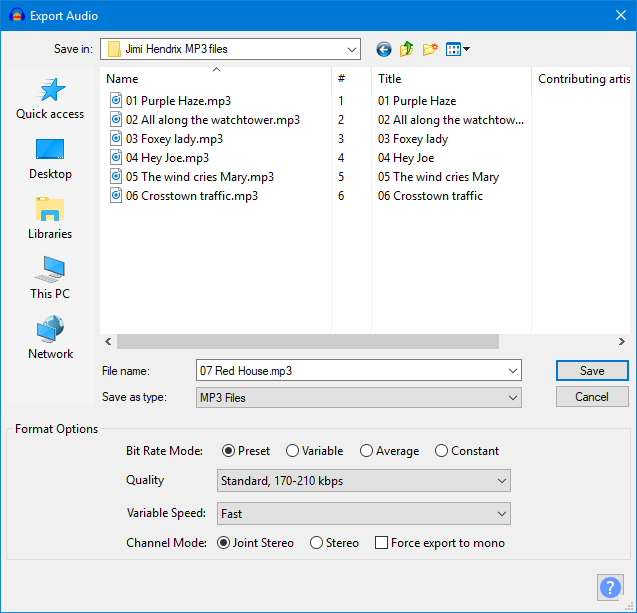 Also accessed by: File > Export > Export Multiple... then choosing MP3 Files from the Save as type dropdown menu. In this case the options dialog will appear in the center of the Export Multiple dialog.

These offer four different ways to control the trade-off between the size and quality of the exported files.

If you are exporting a constant bit rate spoken word MP3 such as an audiobook and have a stereo track in Audacity where both channels are identical, it's preferable to use Tracks > Mix > Mix Stereo down to Mono to convert to a single mono track before export. This will still sound the same on stereo equipment, but have higher quality because the fixed number of bits have less audio to process.

This list lets you select the bit rate in kbps (kilobits per second) for encoding your file. A higher bit rate always gives better quality but at the expense of a larger file size and vice versa. The bit rates are absolute for average and constant bit rate modes, but expressed as a range for the variable and preset modes (except for the Insane preset).

Choice of speed is available when using variable bit rate encoding. It determines the speed and bit allocation routines of the encoding algorithm. The default "Fast" option is equivalent to --vbr-new and is generally recommended for both speed and quality. The "Standard" slower option is equivalent to --vbr-old. It is possible that this may give more consistent encoding quality in some material or if you need to use an earlier 3.9x version of LAME.

These controls determine how the two channels of a stereo MP3 are encoded or if the exported MP3 should always be mono.

When forcing export to mono and you choose variable or average bit rate or a Preset other than "Insane", the bit rate and the exported file size will be reduced compared to a stereo export. This can be done without affecting the quality of the export because less bits are needed for mono encoding than stereo.

MP3 files contain metadata at the start of the file as ID3 tags. These tags typically contain information such as Track Title, Artist Name, Year and Genre. Some of this information may be visible in the playing window of software and hardware players. The tags can be edited with Audacity's Metadata Tags Editor.

By default, the Metadata Tags Editor will always appear at export time. Enter any metadata you require in the editor, then click the OK button (not Save).

To prevent Metadata Editor appearing at export time, click Edit > Preferences, then the Import / Export tab, and in the "When exporting tracks..." section, uncheck "Show Metadata Editor prior to export step". The tags can still be viewed or edited at any time prior to export at Edit > Edit Metadata..., and the tags in the editor at export time will still be exported.

When using Export Multiple, Metadata Editor pops up as many times as there are files to export. This gives flexibility to adjust the tags separately for tracks which form compilations with different artists or genres.

If all the tracks to be exported have common information except for Track Title and Track Number, you may prefer to set Preferences as above so that Metadata Editor does not appear prior to export. Then make any necessary edits to the common tags at Edit > Metadata... prior to export, and the multiple export will proceed silently with the Track Title and Track Number tags added automatically. The Track Title tag will be the same as the file name chosen in the label or track name, and the Track Number tag will be generated according to the order of the labels or tracks.

The default MP3 encoding options in Audacity are 170 - 210 kbps VBR (preset "Standard"). While this is a good choice for stereo music, it is not generally recommended for Podcasts.

For podcasts, "CBR" (constant bit-rate) is recommended, and not "VBR" (variable bit-rate).

The choice of mono/stereo depends on the type of podcast. For voice only podcasts, mono is usually preferred as you can achieve better sound quality with less data. If the podcast contains a lot of music you may prefer to use stereo, but higher bit-rates will probably be required (bigger file size).