From Audacity Development Manual
Jump to: navigation, search
This page provides a detailed description of various ways of controlling playback in Audacity, including keyboard shortcut commands and how to play short periods around selections.

The easiest way to control Audacity playback is with Transport Toolbar:

Play Cut Preview will play audio either side of a selection to preview what deleting the selection will sound like. Hold down Ctrl (⌘ on Mac) while clicking Play.
Alternatively you can use the C shortcut to preview the cut. This also causes the Play button image to change to Play Cut Preview.

Clicking Play when the track is already playing or paused is a quick way to restart playback without first pressing Stop.

Click Pause, or its shortcut P, to temporarily pause playing or recording without losing your place. Click Pause a second time to resume.

Clicking Stop stops playing or recording immediately, and releases Pause if depressed. You must stop playback or recording before you can use the Skip buttons in the Transport Toolbar.

The shortcut Space can be used to either play or stop. After stopping, playback resumes from its last starting point.
Alternatively, use X or Transport > Playing > Play/Stop and Set Cursor to stop playback and set the cursor there. Playback will resume from the stop point on pressing Play.

To change the starting point to anywhere you like, click in the track at your desired starting point, then use Space to play from there.

Click Loop to toggle playback looping on. While it's turned on, the looping region will be played over and over when you press play.

If there is only an editing cursor in the waveform, playback always starts from that cursor position and continues until the end of the project (unless you stop playback).

Whenever audio is played, a green downward-pointing triangle shows the current audio playback position. In the image below, playback starts at 9 seconds at the position of the editing cursor (represented in the Timeline by a black vertical line with left-pointing arrowhead). Playback had reached 14 seconds when the image was taken.

There may be times when you want to move around to hear arbitrary parts of the audio while still retaining the position of the editing cursor or region in the waveform. Click and drag in the timeline to set a loop region without moving the waveform region or cursor and without having to stop and restart playback.

These are three keyboard commands that let you play a few seconds of audio without changing the selection. They can be really useful during editing, such as when you are trying to find the exact spot to cut and paste.

Press 1 while the mouse is pointing to a particular point on the Timeline, and you will hear one second of audio centered on that time. The mouse does not need to be over the waveform itself, and the pointer can be inside a selection, so giving you a way to play one second of that selection, centered on the pointer. For example, position the mouse at 1.0 seconds and press 1 , and you will hear the time range from 0.5 to 1.5 seconds (below).

Play To Selection (B) 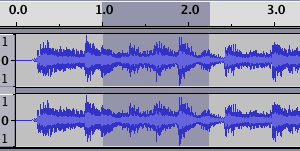 Suppose you have selected a range of audio (above), and you want to make sure it is exactly what you want to cut out. In order to determine whether you have selected exactly the right range of audio, you can not only listen to the selection, but you can position the mouse pointer so as to listen to any desired length of audio before or after the selection.

If you press Space, you will hear the whole selection (indicated by the playback region shown in the Timeline) (below). 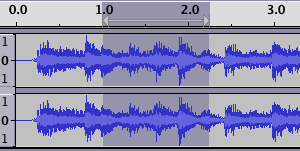 If the mouse pointer is to the left of the selection and you press B, you will hear the audio up to the selection.

when the Ctrl (or ⌘ on Mac) button is held.

In the image below, our selection started at 1.0 seconds. C played the two seconds of audio represented by the overlaid orange arrows. There was only only one second of audio between the start of the track and the selection, so only that was played rather than two seconds, then this was followed immediately by the specified one second after the selection.

Similarly, you can hold Ctrl (⌘ on a Mac) then drag and release in the Timeline to Quick-Play before and after the dragged selection, simulating what a cut would sound like. To hear that Cut Preview repeatedly so as to judge it more easily, click Ctrl + Shift (⌘ + Shift on Mac) then drag in the Timeline.

The following commands play short periods of audio. They were primarily introduced for VI (Visually Impaired) users but will be of benefit to sighted users too:

The periods before and after use the setting of the cut preview as set in Playback Preferences.

On the Track Control Panel for each track there are two buttons Mute and Solo. These buttons can be used to prevent muted tracks being played on playbck (or exported to an audio file)

Click to play just this track. Click again to release the button. Whenever playing audio, Solo takes precedence over Mute by default - the Mute buttons have no effect whilst any Solo button is down.

There are two other options for Solo button behavior in the Tracks Behaviors Preferences. One of these is to remove the Solo button, leaving only a Mute button. The other is more complex suitable for people used to mixing desks, enabling multiple tracks to be "soloed" simultaneously.

There are some additional playback tips on this page: Playback Tips.