From Audacity Development Manual
Jump to: navigation, search
Play-at-Speed Toolbar lets you Play or Loop Play audio at a slower or faster speed than normal, also affecting pitch. Slower than normal speeds can make it easier to transcribe speech or song lyrics.

You can resize the toolbar, to get more precision.

You can change the speed of playback dynamically as you play audio, if you are not doing a looped play or a cut preview. Otherwise you set the setting before pressing play. 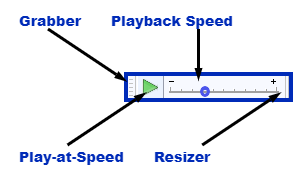 Precise setting of the playback speed

To set a precise playback speed, double-click over the slider (or create a keyboard shortcut for "Adjust playback speed"), enter the desired speed in the box and click OK.

You can control the Play-at-Speed slider with the keyboard. Right click the Play-at-Speed slider then you can use the keyboard left and right arrow keys to change speed by 0.05x increments. Note that this temporarily removes the normal use of these arrow keys to move the cursor position during playback - this is restored as soon as you make any audio selection or audio cursor positioning.

To Loop Play-at-Speed (play the track or selection over and over at adjusted speed until you Stop), hold down Shift while clicking the Play-at-Speed button. This causes the button image to change to Loop Play

To stop press the Stop button

The standard Shift + Space shortcut for Loop Play will only play at normal speed whatever the setting on the Play-at-Speed slider, but you can set a keyboard shortcut for "Loop Play-at-Speed" in Keyboard Preferences.

(like the green Play button but with a vertical cut through it).

There are no default shortcut for the various Play-at-Speed functionality, however you can set a custom keyboard shortcuts for: Play-at-Speed, Loop Play-at-Speed and Play Cut Preview-at-Speed.

Export of the audio will be at normal speed whatever the position of the Play-at-Speed slider. To export at an adjusted speed, use Change Tempo... in the Effect Menu to change speed without modifying pitch. Alternatively, use either Change Speed... or a Time Track to change speed also affecting pitch.