From Audacity Development Manual
Jump to: navigation, search
The Sync-Locked Track Groups feature is enabled by the "Sync-Lock Tracks" menu item. It ensures that length and position changes occurring anywhere in a defined group of tracks also take place in all audio or label tracks in that Sync-Locked track group even if those tracks were not selected.

This lets you keep existing audio or labels synchronized with each other even when carrying out actions like inserting, deleting or changing speed or tempo.

You need to look for the Sync-Lock icons

in the Track Control Panels to know if tracks are Sync-Locked.

The Sync-Lock Tracks setting that you choose is a global one that applies to all Audacity projects, not just the current one, unless and until you subsequently change the setting.

Any audio track in Audacity can be in a group of one or more adjacent tracks that can be Sync-Locked with other tracks in that group.

When Sync-Lock is on, an icon

shows bottom right in the Track Control Panel of each track in a Sync-Locked Track Group, provided at least one of those tracks is selected. The icon denotes all tracks that will be affected when a menu operation in a selected track inserts or deletes audio (or otherwise changes the audio's position on the Timeline). The unselected tracks in the Group that will be affected are denoted by a patterned "Sync-Lock" selection in the waveform (a wallpaper with clockfaces) instead of the dark gray of a normally selected track.

Selecting at least one track from within a Group will mark that particular group as Sync-Locked, the icon

will appear in the Track Control Panel of all the tracks in that Group. If you have multiple Groups then clicking on a track in a different Group will cause the Sync-Lock selection to move to the new Group.

You can select multiple Groups to be Sync-Locked. Following your initial group selection, hold Shift while clicking on the Track Control Panel in one of the tracks in the additional Group(s) that you require. See the example below.

This shows a Project with three Sync-Locked Track Groups. The top two are both delimited by label tracks, the bottom one just has audio tracks and no label track. 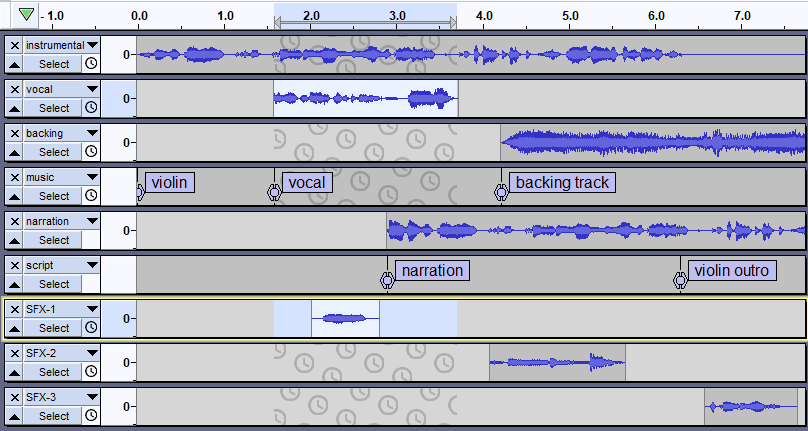 Note that the top group and the bottom group are both selected, see the clock icons in the Track Control Panels for each of the tracks, including the label track, in those selected Groups.

Also observe that although a selection has been made only in the second track of the first group and the first track of the bottom group all the other tracks in both Groups, including the label track, have the clock-wallpaper background to indicate that they are Sync-Locked. The middle group is not Sync-Locked and would remain unaffected by any editing changes applied to the selected Groups.

The following links demonstrate in more detail the use of Sync-Locked Tracks in Audacity for common editing tasks: