The Edit menu commands Cut, Delete and Paste will affect all tracks in the currently selected Sync-Locked Track Group because these commands change the length of the tracks(s).

All other commands in the Edit menu will not affect Sync-Locked tracks because these commands do not change the length of the selected track(s).
These commands are: Split Cut,  Copy,  Trim Audio,  Split Delete,  Silence Audio,  Split,   Split New,  Detach at Silences and   Duplicate.

Result: Audio has been cut from the lower track as well as the upper track.
The same thing happens for Edit > Delete because those commands remove audio from a track and the following audio on all sync-locked tracks must move to remain synchronized.

Result: There has been no change in the lower track.
This is because "Silence Audio" does not move (change the time position of) any audio in the selected track.

Here is the same project but now there is no selection. The cursor is in the top track, and that track is selected as can be seen by darker gray color of the Track Control Panel.

You need to look for the Sync-Lock icons

in the Track Control Panels to know that these tracks are Sync-Locked.

Result: Audio is pasted into the top track moving the following audio to the right.
Silence is inserted in the lower track to keep it synchronized with the top track. 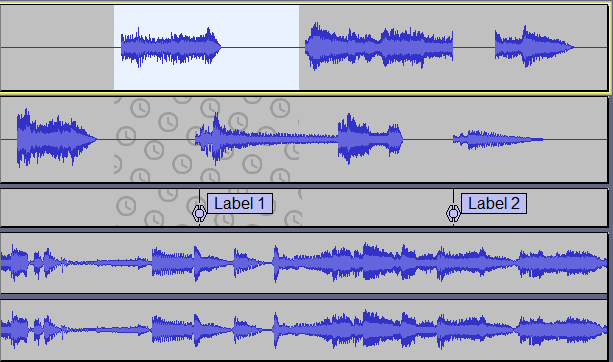 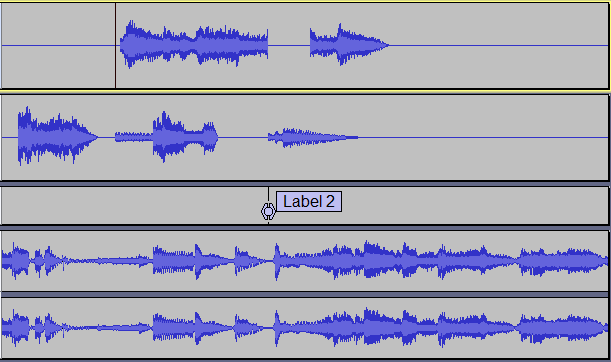 Selections can be made in a label track and the Sync-Locked selection will extend into any audio and label tracks in the group.

Result: The selected portion of the label track is removed, including the label spanned by the selection.
Audio is removed from the Sync-Locked audio tracks as well.

Result: Audio has been reversed in the lower track as well as the upper track, also the labels in the Label track have been reversed this keeping everthing in synchronization.
Note that in the audio tracks Audacity has turned both reversed audio sections into Clips, observe the black clip lines.