From Audacity Development Manual
Jump to: navigation, search
This tutorial describes a known working method of creating a multiple sound track overdubbing session from scratch in Audacity. That is, you record one track and then play it back and add a second track against it -- drums, guitar, voice; repeat as needed. In this tutorial you will be able to hear a mix of your live recording and the previous tracks simultaneously in your headphones (also required). Live monitoring is often unavailable (or you hear yourself too late) without purpose-built hardware.

This process uses your existing analog microphones, instruments, sound mixer or amp. You will be connecting your already working sound system to the computer and Audacity through a special, required USB soundcard. You will also need to use a short audio adapter cable during the system setup and adjustment: 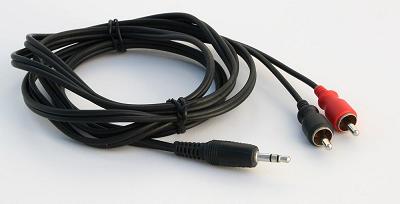 The Behringer\xc2\xae UCA202 can be used for overdubbing and sound-on-sound by connecting your computer to your headphones and analog stereo mixer, turntable/CD DJ system, keyboard or other music production equipment. It will not amplify a microphone or a turntable directly, and it will not work with a USB microphone and may not work with a USB mixer. It will work with a guitar pickup and the right cable adapters. We will be using a stereo mixer as the example in this tutorial. 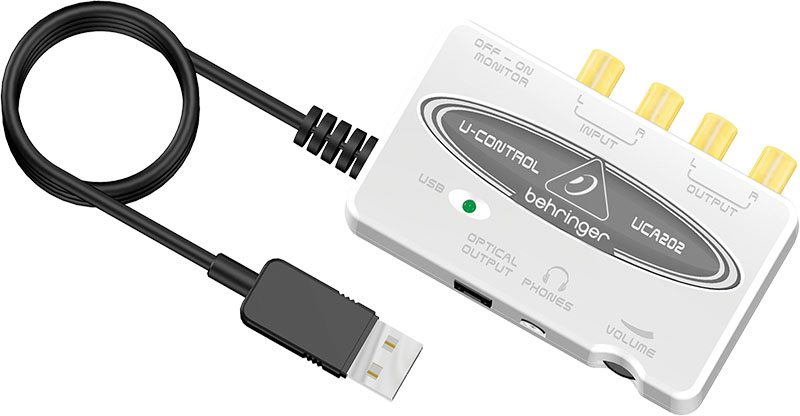 The UCA202 has a headphone connection and, when switched to Monitor-On, will mix sound from the computer playback with live performance sound. This is the mix you need to sing or play to yourself with no latency, echoes or other impairment. The mix is half-and-half and you cannot change it, so it may take some experimenting to get the headphone mix just right as you perform.

Almost any Windows\xc2\xae, Mac\xc2\xae or Linux\xc2\xae machine with fast enough USB and good storage can be used. Our example here uses Mac earbuds for listening, but nearly any good headphones or earbuds are OK. If you require cranium-crushing headphone volume, you may need a headphone amplifier. You must get the headphone sound from the UCA202, not from the computer soundcard. 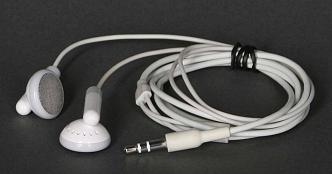 Headphone monitoring is good; live microphones and speakers in the same room is a recipe for feedback.

The Behringer UCA202 has three jobs:

The one "magic" feature of this device is the ability to mix your live voice with the computer's rhythm track so you can hear the mixed musical performance and that can only happen if the rhythm track is available. Making the USB device the playback device makes this functionality available.

First we will make a simple recording, with no overdubbing or other fancy tricks. The system has to work correctly for simple recording and playback before we go further.

Connect the USB, headphones and mixer. 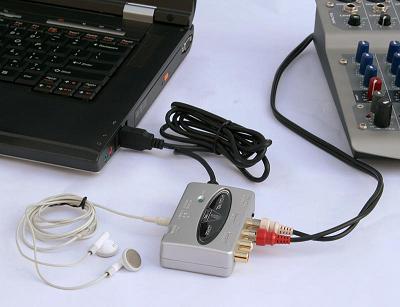 The UCA202 must have a direct connection to the computer; USB audio will not go through a hub or long USB extension cables.

In this example we are using the sound mixer's Tape-Out for the connection.

This is not a tutorial on making a recording and playing it back, but you need to be able to do that before you do anything else. There are multiple tutorials and wikis on Recording.

Set the computer control panels, preferences and Audacity dropdowns to recognize the UCA202 USB device for both stereo recording and playback. The UCA202's name is USB audio CODEC.

You may want to make the Audacity project window larger than its default and expand the Meter Toolbars.

Click once anywhere inside the recording meter (the one with the mic icon) to put the meters into Monitor Mode. They will display the microphone's sound level without starting Audacity recording and wasting drive space. This may fail on certain Linux machines using Jack.

Switch the UCA202 Monitor to ON. The UCA202 has no volume controls for the audio being recorded or the audio being played on the computer. The volume has to be set at the mixer or amp. The only UCA202 control is headphone volume.

Play a record, play an instrument, or sing through the mixer. Do not peak much over -10 to -6 on the Audacity meters. You can fix low levels later, but you cannot fix overloading, smashing, and clipping (meters too far to the right). You should be able to hear your performance in the headphones. Adjust the UCA202 volume control as needed for comfortable listening.

Click "Record"; Audacity will take a second to configure itself and start recording. The blue waves will start to crawl left to right as you perform. Play or sing a simple song that you can use for rhythm and timing tests later.

Click "Stop", then "Home" and then click "Play" to hear the track you have just made. You should hear the track in your headphones. While listening, if you tap or scratch the microphone, you can hear the scratching/tapping too--they are both live.

This is an example of what you will hear during the overdub sessions. Any combination of existing tracks will play in your headphones, in addition to your live voice, allowing you to set a good mix and timing.

Click "Home" then click "Record" and you will get a new recording underneath the first one. Sing or perform in time to the first track; when finished click on "Stop" then "Home".

The project will have two tracks, one from each performance, but it may be seriously out of time or rhythm -- even though you were in perfect time when you recorded it. This is recording latency and you can adjust it to zero using Audacity's latency tools; done properly, both the live recording session and the later playback will be in perfect time. 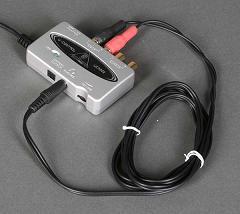 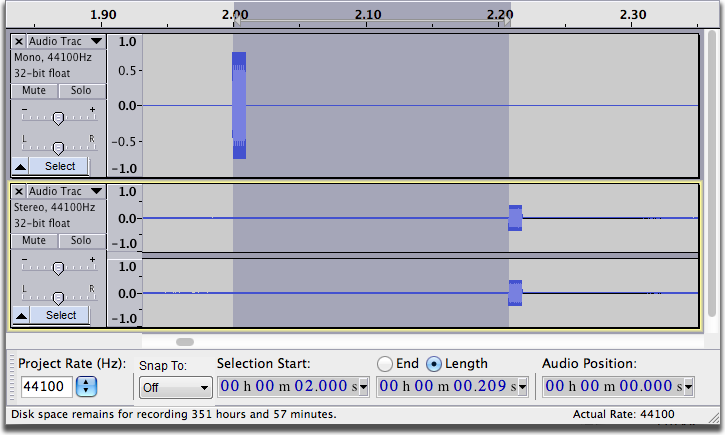 That is how much the rhythm misses and that is the latency. Keep magnifying until you can get a good shot at accuracy. Use CTRL+3 - or on Mac CMD+3 to back out slightly if you magnify too much by accident.

You are mostly interested in the milliseconds -- the last numbers on the right. The reading in the example above is 209 msec.

This time the two click tracks should look perfectly on (or very close to it) and sound perfectly in time. If not, zoom in, measure the new difference and add that number to the latency value. 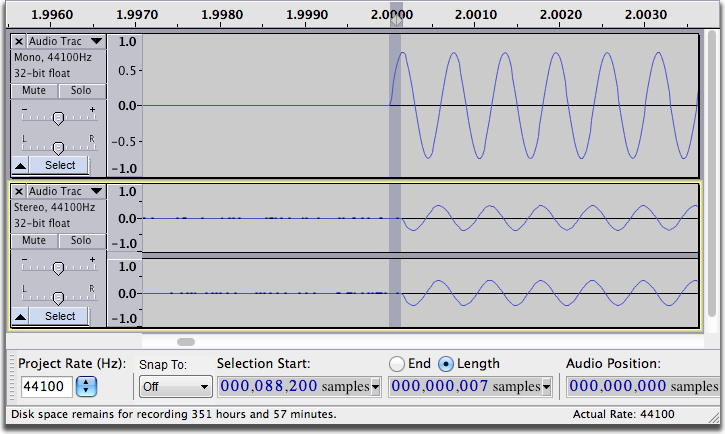 In this example, the tracks align to within 7 samples, which is about 0.15 milliseconds - much less than the smallest correction you can make in the Latency Correction. This is as good as it gets.

Before you get too obsessive about this, an orchestral musician once said that the chances of any two instruments in the orchestra starting the same note at the same time is zero, so you do not need to adjust things down to the digital sample level. The latency values on home computers can wander in normal use.

File > Close (you do not need to save any of your tests). You are ready for the first session.

Switch the UCA202 Monitor to ON.

The first recording can be whatever you are planning to use as a base, backing track, guide or rhythm track. It can be anything including Generate > Rhythmrhy Track which can be adjusted with its control panel for rhythm and composition. It could be music from a rhythm and chord machine playing to the mixer.

You should record a lead-in. That is, a non-musical rhythmical clue before the music starts so as to warn you of the imminent start. In a live band, this would be the drummer or lead guitar count-in. Use the keyboard rhythm stops or you can perform several rim shots into the microphone to establish the rhythm before the first note; tapping on the table with a pencil also works. You can sheer it off later in post production so nobody else will hear it. Tick, tick, tick, tick, music; adjust as appropriate for music type and rhythm.

Click "Stop", then "Home" and then "Shift Record" to record track two using your live performance and track playback in your headphone mix as a guide. Repeat for as many tracks as required. Repeat until bedtime. Lay in supplies. Once working, this is seriously addictive.

The Mute and Solo buttons to the left of each track are valuable in overdubbing. Solo causes only that track to play and Mute turns that track off. Solo has options that can be set in Preferences. The gain control in the Track Control Panel to the left of each waveform controls the playback volume of that track -- it affects the headphone mix.

When you get to a stopping point click the Stop button

As you progress, you should save a new Project periodically with a slightly different file name using File > Save Project > Backup Project....

A good recommendation is to use ISO date and time for the file names or the start of the file names; refrain from using slash marks or other punctuation marks in a file name.

Do not go weeks with one Project and file name, and never cover up or record over existing work. If anything happened to that one Project, your project would be ruined and could nullify weeks of work. Think of what would happen if the lights went out right now, the computer ground to a halt and you were forced to use the last known good version of the project.

For extra safety it is good practice to periodically back up your project versions to a DVD-R or external hard drive for archive purposes. In the unlikely event that the Audacity project is corrupted or your hard drive crashes you will be able to recover your work.

Note that Audacity projects cannot be played in computer media players nor burned to audio CDs. Export your project as 16-bit WAV or AIF for burning to a CD, or to MP3 for email or Internet delivery. See Mixing Audio Tracks, in the Audacity Manual, for advice on doing the final mix of your project.