From Audacity Development Manual
Jump to: navigation, search
This enables you to save your project in full uncompressed mode (or compressed which saves space). You can also store projects as backup safety copies at stages throughout your project.

Note that Audacity projects only work in Audacity, they cannot be read and played by other applications.}} 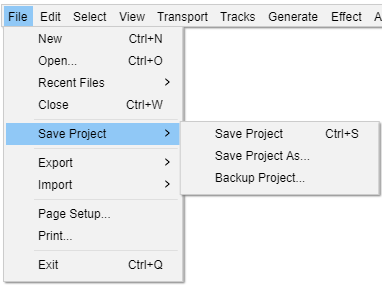 Saves the current Audacity Project in uncompressed, lossless quality using the AU container format. An AUP project file is created, along with a folder with the same name as the AUP file that contains the project's audio data. For example, if you save a project as chanson.aup, a folder called chanson_data will contain the audio data files.

Audacity projects are not intended to be read by other applications, but to provide fast loading and saving of audio within Audacity, with all project data such as label tracks and envelope points retained . When you are finished working on a project and you want to use the results in another application, select one of the Export commands.

Same as "Save Project" above, but allows you to save a copy of an open project to a different name or location. This can be useful if you want to preserve a snapshot of the state of a project at a particular time, then proceed to make further changes to the new renamed project you just saved.

Save Lossless Copy of Project...

Saves a copy of the current Audacity Project in uncompressed, lossless quality, leaving the current project open for you to continue working on it.

All audio in the project is rendered to 32-bit float WAV files, thus making the copy self contained (removing any dependencies on any audio files outside of the project). Then when Audacity is used to reopen the lossless copy project the WAV files will be read and copied into the project as ".AU" block files (the normal format for a project's audio data). But note that the WAV files will remain in your project's data folder as safety copies.

Limitations: When a "Lossless Copy" is made, if there are any envelopes in the project, rendering the audio tracks will apply the envelopes to the tracks. This is intentional as it ensures that the WAV files will sound like they did in the project, even if the project's ".AUP" file is lost or damaged. The downside is that volume changes created by envelopes become permanent in the copy of the project (this does not affect the original project, only the saved copy).

Save Compressed Copy of Project...

Saves a copy of your project in the compressed Ogg Vorbis format, each track being saved as a separate OGG file. When you quit Audacity you may still be prompted about saving changes. Saving changes would save a separate, standard uncompressed project as above, so if you do not want that you can quit Audacity without saving.

Most project data will be retained, including labels, gain and pan settings, track positions on the timeline, track order and metadata. Clips will not be retained - spaces between clips will be converted to silence. Volume envelopes present when saving will be rendered, but the actual envelope points will be lost.