From Audacity Development Manual
Jump to: navigation, search
Audacity offers many tools which allow the user to play all or part of a sound. There are also many recording options.

The easiest way to control Audacity playback and recording is with Transport Toolbar:

Play Cut Preview will play audio either side of a selection to preview what deleting the selection will sound like. Hold down Ctrl (⌘ on Mac) while clicking Play.

Alternatively you can use the C shortcut to preview the cut. This also causes the Play button image to change to Play Cut Preview.

Clicking Play when the track is already playing or paused is a quick way to restart playback without first pressing Stop.

Clicking Record or using the R shortcut always begins recording at the end of the currently selected track(s).

Click Pause, or its shortcut P, to temporarily pause playing or recording without losing your place. Click Pause a second time to resume.

Click Loop, or it's shortcut L to set a loop region. When you use it the first time, it'll set your current selection to the loop region. If you press Play with looping enabled, it will loop the current loop region over and over.

When you get more used to Audacity, it is often easier to use keyboard shortcuts for repetitive actions like playing, pausing and recording. Below is a list of the equivalent keyboard shortcut for each of the Transport Toolbar buttons, with a description of what each button and its shortcut does.

You can adjust the playback volume using the output level slider in the Mixer Toolbar.

The Playback Meter will show you the overall volume of all of your tracks when mixed together.

Playing at slower or faster speeds than normal

Using the Play button in Play-at-Speed Toolbar plays at a constant speed but slower or faster than normal.

Envelope Tool on the Tools Toolbar, when used in conjunction with a Time Track, allows a speed envelope to be drawn which can increase or decrease playback speed over the length of the audio.

You can change Audacity to play and record with a fixed head pinned to a position in the Timeline. In this mode the head remains static and the waveforms will move as the audio is played or recorded.

This behavior is controlled by using the button at the left of the Timeline. By default this shows as a green downwards-pointing triangle (like the play head). In this mode, the play head or record head will move horizontally and the waveform will scroll when necessary, except that if Auto-scroll if head unpinned is unchecked in Tracks Preferences then scrolling will not occur.

Clicking on the green triangle will cause a context menu to be popped up. From that context menu you can check on Pinned Play Head. This will cause the button icon to change to a drawing-pin which indicates that the play head or record head is now pinned to the center of the Timeline and when playing or recording takes place the waveform will move continuously under the fixed head.

Unpinned or pinned head can also be selected in Transport > Transport Options.

For details on setting and un-setting pinned play and record head please see Pinned Play/Record Head on the Timeline page.

For fuller details of how to use playback, including keyboard shortcut commands and how to preview short sections, please see the Playback page.

Timeline Quick-Play provides a quick and convenient means to either start playback from any point within the current project or to playback a region of audio.

For details see the Quick-Play section on the Timeline page.

Scrubbing or Seeking is the action of moving the mouse pointer right or left so as to adjust the position, speed or direction of playback - a convenient way to quickly navigate the waveform to find a particular event of interest.

. Alternatively you can use the Transport > Scrubbing menu item and select Scrub or Seek from the cascading menu.

Audacity will remain in scrubbing/seeking mode until you return it to normal play mode. Clicking the Stop button

(or its shortcut Space) at any time will stop scrub/seek play and return you to normal play mode moving the cursor to the current scrub/seek play position. If you wish to stop scrubbing or seeking without losing the position of the editing cursor or selection, use the Escape Esc key.

MIDI (and Allegro .gro) files can be imported into Audacity with File > Import MIDI... to a Note Track.

Audacity can now play these MIDI (and Allegro) files, but note that there will no use of the Playback meter while Note tracks are played. Although Note track playback should just work on Windows, on Mac and Linux additional software may be required.

Editing these Note tracks is possible, but very limited.

In order to achieve Note track playback on Mac and Linux you will need to install, and run, additional software, a software synthesizer

Please see these pages in the Audacity Wiki:

For fuller details of how to use recording, including how to control where and which track you record in and keyboard shortcut commands, please see the Recording page.

on Transport Toolbar, or use the R, Audacity will record at the end of the currently selected (or only) track, or create a new track if you have an empty project.

When recording like this, at the end of an existing recording, Audacity will place a Clip line at the junction between the two recordings to aid you in separating them later if required. See the Recording page for details.

You can record a new track while listening to previously recorded tracks. This is called overdubbing. To set up for overdubbing, make sure that Transport > Transport Options > Overdub (on/off) is enabled (on) which is its default setting. See the tutorial set Recording Multi-track Overdubs for more help with overdubbing.

. Then clicking on this modified Record button, or using the shortcut Shift + R will cause Audacity to create a new track and begin recording on that track from the current cursor position (or from the left edge of a region on the Timeline).

If there is a region in the Timeline, that region will be recorded in a new track.

Yet another way to record is using the Timer Record utility, found in the Transport Menu. 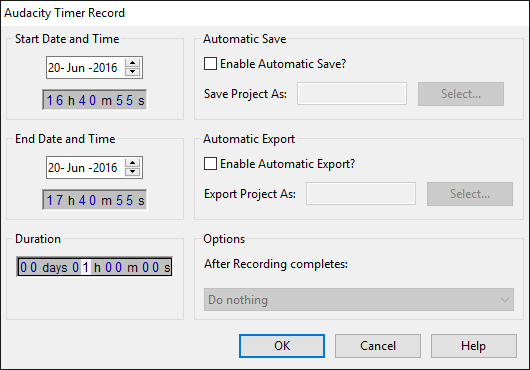 Use it to start recording later, or to record for a certain duration before stopping.