From Audacity Development Manual
Jump to: navigation, search
A Time Track is used in conjunction with one or more audio tracks to progressively increase or decrease playback speed (and pitch) over the length of the audio. Speed changes are controlled by manipulating the blue "time warp" line with the Envelope Tool used for making gradual volume changes. If the blue line is dragged above the horizontal, the audio plays faster; if dragged below, it plays slower.

General method of use: 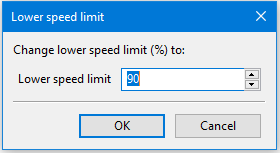 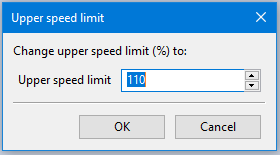 Changing the range rescales the Time Track to the new limits, preserving the warp value of any envelope points that were there before. Having changed the range, you can now move the warp line up or down anywhere within the new upper or lower limit of the range. 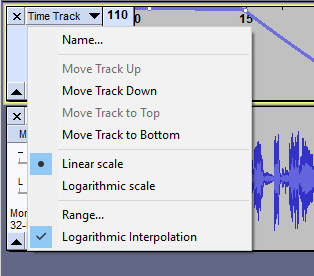 Clicking in the panel containing the downward-pointing triangle (to the left of the track) opens the Time Track Dropdown Menu containing display choices for the track:

Label tracks can also be moved up or down by clicking between the controls in the track's Track Control Panel then dragging upwards or downwards.

You can also set the scale of the Time Track by right-clicking in its Vertical Scale which will give you a dropdown context menu:

A Tutorial on Time Warping

Key points about the image above: