From Audacity Development Manual
Jump to: navigation, search
Using the commands in the Audio Track Dropdown Menu you can:

Here is a stereo track:

You can make separate left-channel and right-channel tracks so that you can edit them separately. Open the Audio Track Dropdown Menu and choose Split Stereo Track: 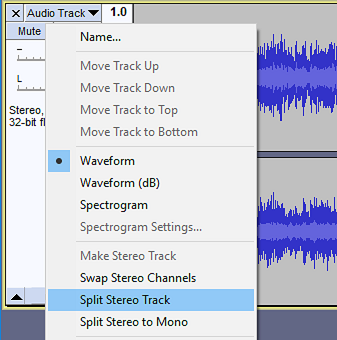 Now you can see the two tracks marked "Left" and "Right":

You can instead choose to split a stereo track into two mono tracks.

After choosing "Split Stereo to Mono" from the Track Dropdown Menu on the original stereo track we get two separate mono tracks:

Note that in this case both mono chanels are center-panned - different to the hard left and right panning that you get when you make a simple split of a stereo track.

Choosing "Make Stereo Track" from the Track Dropdown Menu of the upper track of a pair of mono, left or right channel tracks (in any combination) will combine those two tracks into one stereo track. The upper track will become the left channel of the stereo track and the lower track will become the right channel regardless of their current designation as mono, left or right. In the example below, two mono tracks are about to be combined into one stereo track. The result of this operation will be to re-create the stereo track as shown in the first image on this page. 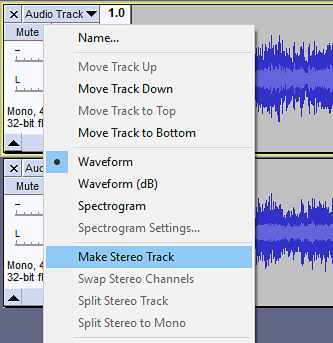 Example 1: Applying equalization to one channel of a stereo track

Assume that you have a recording where one channel is "muffled" - lacking in high frequencies compared to the other channel.

Example 2: Reducing the "width" of a stereo track

Assume you have a recording of a drum kit where the stereo spread of the kit sounds unnatural. The high hat sounds like it's coming from the right speaker only and the floor tom from the left speaker.