From Audacity Development Manual
Jump to: navigation, search
The purpose of a crossfade is to produce a smooth transition between two sections of audio. The two sections overlap and as one section fades out the other fades in. This technique is commonly used by DJ's, for "compilation" tracks and mashups. The use of crossfades is not limited to joining pieces of music, but can be used in many other situations where a smooth transition is required, including editing speech recordings, extending songs, creating loops for audio sequencers, repairing damaged recordings and much more.

How to crossfade two tracks

First, the tracks should be imported or recorded. By default, importing two audio files will create two audio tracks one above the other. Similarly, recording a new track will by default create a new track below any other tracks in the project. This is the arrangement that we want as the starting point (for clarity the illustrations show mono tracks, but the procedure is exactly the same for stereo tracks).

If you want to crossfade multiple songs that are currently one after the other in a single audio track then before making a crossfade using the methods described in this article you must select the first song, use Edit > Clip Boundaries > Split New to move that song to its own separate track, then select and Split New the other songs.

. Don't worry about getting the position too precise at this stage as we will adjust the position later. For crossfading two music tracks, an overlap of around 5 seconds is usually suitable, though sometimes a much shorter, or longer crossfade may sound better. How long the crossfade transition lasts is largely a matter of personal taste. 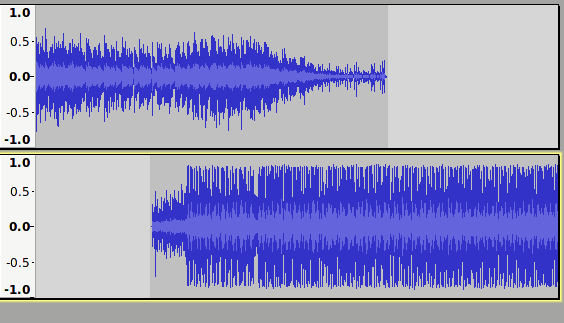 Tracks will often begin and end with a short period of silence. Leading/trailing silence may be removed by selecting and deleting. Audacity's Cut Preview can be useful to check that the selection to be deleted is correct. 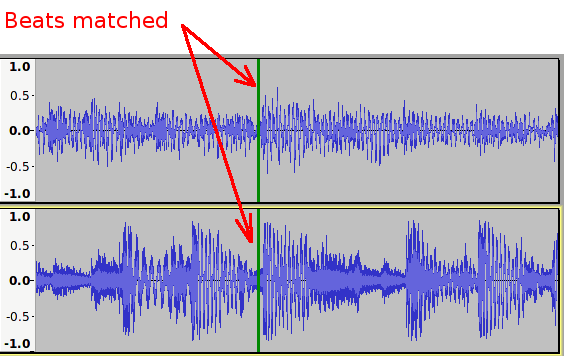 After selecting the region to be crossfaded, create a split at both ends of the selection using Ctrl + I. The split marks will greatly facilitate selecting the appropriate areas in each track. 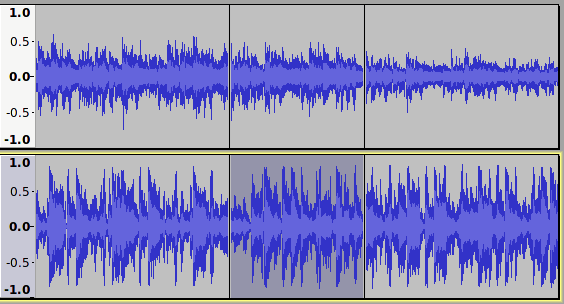 If, as in the images above, it is necessary to trim the tracks further, select the unwanted region after the fade out (in the upper track in this case) by double-clicking in it, then delete it.

When deleting the audio before the fade in (in the lower track in this case) use Edit > Remove Special > Split Delete, or the keyboard shortcut Ctrl + Alt + K so as to avoid moving the remaining part of the track. 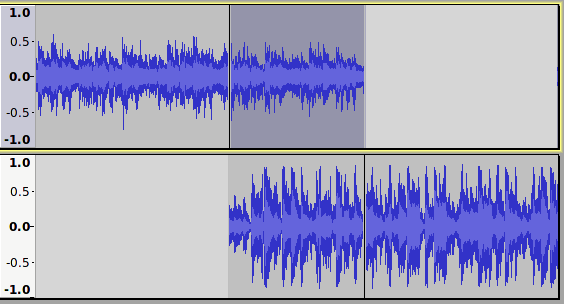 The quickest way to apply the fades is with the Crossfade Tracks effect. This effect applies a fade-out to the upper selected track, and a fade-in to the lower of the two tracks. For more complex fading, the Adjustable Fade effect may be applied to each of the tracks in turn, applying a fade-out to the overlapping section in the first track, and a fade-in to the overlapping section of the second track. 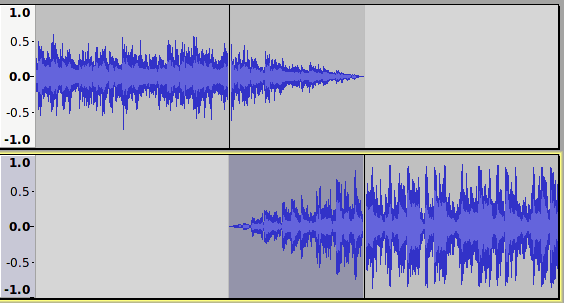