From Audacity Development Manual
Jump to: navigation, search
Audacity ships with several types of fade effects: a pair of simple linear fades, a pair of fades to help you make a crossfade, a more musically pleasing fade out (similar to that used in many recording and mastering studios) and a powerful customizable fade.

For more detail on fading please see Fade and Crossfade

These basic fades apply a fade to the selected audio such that the amplitude of the selection goes from absolute silence to the original amplitude (Fade In), or from the original amplitude to absolute silence (Fade Out). The shape of the fade is linear, so it appears as a straight line from beginning to end (when viewed in the default linear Waveform View Mode). The speed of the fade in or out is therefore constant throughout its length and depends entirely on the length selected for the fade.

Accessed by: Effect > Fade In

A fade in is often applied over a very short audio selection (less than a second). You may get a more "musical" result by applying a linear fade in three times to the same audio selection. This approximates an exponentially shaped fade in.

Accessed by: Effect > Fade Out

A fade out is often applied to a longer selection than a fade in, typically to a selection up to about ten seconds long.

Accessed by: Effect > Studio Fade Out

Produces a smooth and "musical" sounding fade out from original volume to silence by applying a doubly-curved (S-shape) fade and fading out the higher frequencies a little quicker than the lower frequencies. It gives a "going off into the distance" type of sound rather than sounding like a "mechanical" fade out. This technique has found favor in recording studios for CD and LP tracks.

You can make a simple customization of the shape of any of the above fades by repeating it using Repeat Last Effect ( Ctrl + R ). If you repeat a fade in, the audio will remain quiet for longer then rise more rapidly to the original level. Repeating a fade out will cause the level to initially drop more rapidly then tail off at a lower level. 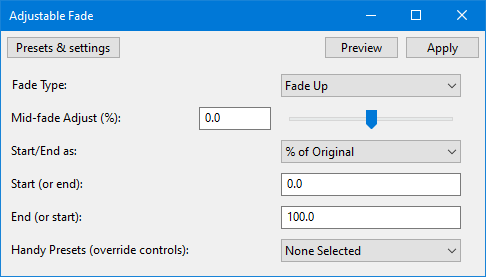 The image below shows the result of a partial fade down from original volume to 30%, applied to a the selected part of a constant amplitude sine tone. The shape is exponential (the fade down becomes slower with time), as produced by setting "Mid-fade Adjust" to a value of -50%.

By using Adjustable Fade with different settings on different sections of the audio, almost any fade shape or combination of shapes can be produced, entirely using the keyboard.

While you can manually create a custom crossfrade using the fades on this page, the esiest way to make a crossfade between two tracks is to use on of the two crossfade effects available in Audacity.