From Audacity Development Manual
Jump to: navigation, search
Label Sounds is a tool which can useful to label the different songs or sections (or silences) in a long recording, such as the tracks from an LP or cassette.
This analyzer is an upgrade of the old "Sound Finder" from previous versions of Audacity. It is more accurate, and more versatile than previous versions, supporting both region labels and point labels.

The audio is processed in 10 ms chunks, (intervals of 0.01 seconds), thus the label placement may be up to 0.01 seconds before / after a sound.

Normally the effect would be applied to a single track. If multiple tracks are selected, each track is processed in turn and all of the labels will be produced in a single label track.

When audio is below this level, it is considered to be 'silence'. The lower (more negative) this setting, the quieter the background level must be to be recognized as "silent". If set below the track's noise floor level, the entire track will be seen as one continuous sound.

When 'silence' of this duration (or longer) is found, preceding sound and following sound are considered to be separate sounds, provided that the previous sound is at least the 'Minimum sound duration'. Valid values are between 0.01 seconds to 1 hour. See examples below.

Allows short sounds to be grouped within a label region. This ensures that labels will be at intervals of no less than this length. In effect this combines short sounds to create a group of sounds that is at least the specified length. Valid values are between 0.01 seconds to 2 hours. See examples below.

This setting is used by region labels only.

This is the text that will be entered in each label.

Clicking on the command buttons give the following results:

In these examples, all settings are at default values except for the settings mentioned in the example.

In this example, the first silence is 2 seconds, the second silence 5 seconds, and the final silence 1 second.

In this example, each sound and each silence are about 1.76 seconds long.

In this example, each label track was created with default settings other than "Label type" and "Label text" settings. 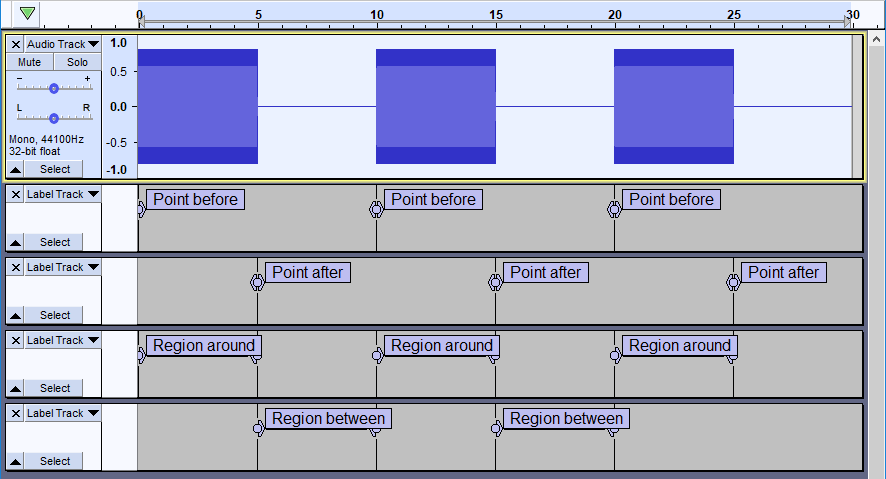